Watford 3-1 Leicester: From Dejection to Delirium in 18 Extraordinary Seconds

Watford 3-1 Leicester is part of 90min's 20 Greatest Matches of the Decade series. Follow the rest of the series over the course of the next few weeks.

The events that unfolded on 12 May 2013 were some that would live joyfully in the memories of Watford supporters for years to come, while they were filed away under the 'never to be revisited' section by the Leicester faithful.

One of the most endearing qualities of football as a sport is its ability to provoke a pulsation of emotion at the drop of the hat. The idea that anything can happen, at any time.

A simply astonishing football match at Vicarage Road was the perfect embodiment of that, and reminded us all - in case we had forgotten - just why this is the most widely-loved sport on the planet. 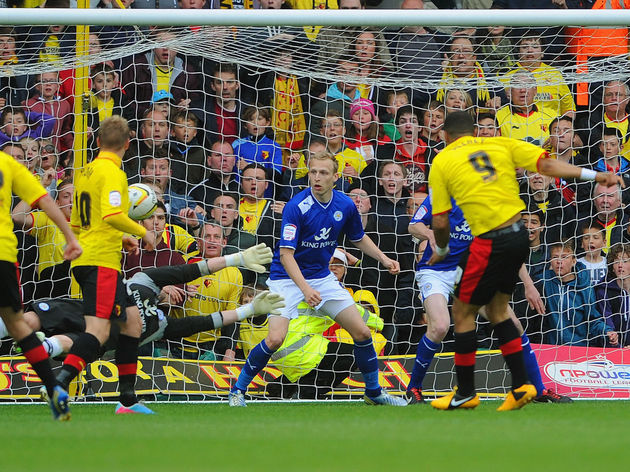 To provide the accurate level of immensity for one man's thunderous half-volley, first we need to offer some context into how these two sides got into this position.

On the final day of the Championship season proper, ​Watford were vying for an automatic promotion spot in a two-way tussle with Hull City. Leading Cardiff 2-1 in the 91st minute, the Tigers relinquished the lead that would have ensured promotion.

That draw ensured Watford - whose match was 15 minutes behind Hull's due to a lengthy injury - needed to win their clash against Leeds to escape the division. Leeds netted an 89th-minute winner to end those hopes against the ten-man Hornets.

​Leicester, meanwhile, were in a three-way dogfight to secure the final play-off spot. A last-gasp winner against Nottingham Forest secured victory, while Bolton Wanderers could only manage a 2-2 draw with Blackpool, in turn missing out on the play-offs to the Foxes on goals difference.

That was only the beginning of the madness. A first-leg face-off between Watford and Leicester went the way of the Foxes, with the home side deservedly taking a 1-0 lead into the return leg in Hertfordshire.

Basking in the May sunshine there were few supporters in the ground, and indeed watching on from the comfort of their homes, who could have foreseen anything like what they were about to witness.

In typical Championship play-off fashion, a swashbuckling opening to the match saw both teams in an almighty tussle, where a lack of ​Premier League quality was more than made up for with the guts and grit that is the quintessential allure of the second-tier.

The opening goal, however, was straight out of the top drawer. 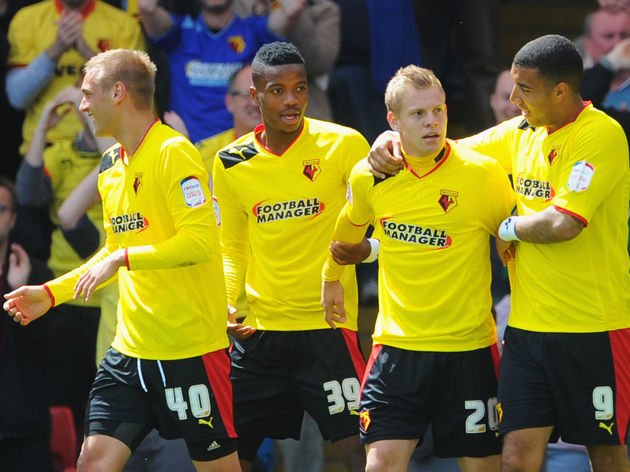 That levelled the tie on aggregate but Leicester got their noses back in front just four minutes later, as goalscorer from the first leg David Nugent out-jumped Lloyd Doyley at the far post to nod in Matty James' corner.

Enthralling in every aspect, with both sides starting the match in sixth gear, an unmissable encounter continued to entice its audience as the game ebbed and flowed with unwavering excitement.

Anthony Knockeart should have put his side back in front before the break, with his skied effort only now bearing far more significance than it seemed on the day.

The calmest moment any of the supporters will have had on that particular Sunday will have been the five minutes waiting in the queue to grab their half-time pie. Simply because, what happened next has been etched into footballing folklore. And why it is listed in this particular series. Picking up where it had left off, Gianfranco Zola's side piled forward in the second half, peppering the Leicester goal at every given opportunity.

Delirium and dejection emitted from both sets of supporters, as the Frenchman went to ground under minimal contact to unquestionably buy his side an opportunity to reach Wembley with a single kick.

It was seemingly all over. After understandable protests from all in the ground who weren't wearing blue, Knockeart stepped up. This penalty was all that stood between Leicester City and the national stadium. All Knockeart had to do was score in among a cacophony of abuse from the home faithful.

Manuel Almunia had other ideas.

Diving to his left, but keeping his legs stretched, the Spaniard saved Knockeart's initial effort before rising from the turf in time to parry the rebound. 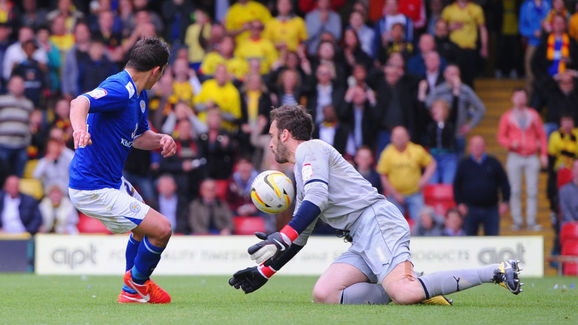 Cassetti reacted quickest to hoof the ball to safety, knowing they would live to fight again in extra-time.

That punt upfield found Ikechi Anya, who took the ball down with otherworldly composure.

The Scot made a marauding run down the right flank that had Leicester players clambering back with immeasurable fear. Still carrying the ball, he fed the onrushing Fernando Forestieri.

The Argentine dummied a cross to give himself the extra yard over Wes Morgan, before floating a ball towards Jonathan Hogg at the back post.

The midfielder was in acres of space but draws the goalkeeper out of position, cushioning a perfectly weighted header into the path of Deeney.

Vydra moves into a position where it appears as if he will take the shot on, but he shifts to one side as there is only one person on that football pitch who is going to lay claim to that ball. Bouncing perfectly for the half volley, Deeney adjusts himself accordingly and thunders the ball so hard it nearly takes the net off. 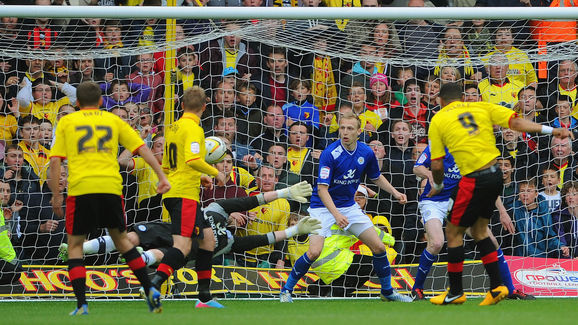 "Do not scratch your eyes, you are really seeing the most extraordinary finish here."

Utter pandemonium kicks in as the fans take to the pitch.

Zola slips to the floor in his celebrations.

The Leicester players drop in despair. The following wait as the fans returned to their seats will have felt like forever to all those associated with Leicester, but when the game eventually resumed to play out the final 60 seconds, the outcome was already done and dusted. Watford were going to Wembley.

And in a manner we'll likely never see again.

Manchester City 3-2 QPR: You'll Never See Anything Like This Ever Again

Scotland 3-3 Argentina: High VARma in Paris as World Cup Underdogs Knock Each Other Out

Roma 3-0 Barcelona: The Night Roma Rose From Their Ruins