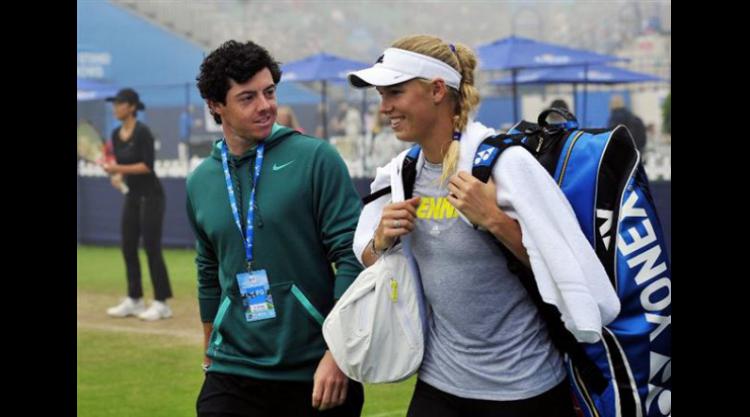 Caroline Wozniacki admitted that she was being inspired by the imminence of her wedding to Rory McIlroy after bringing about a great survival in the first round of the Dubai Open.

"I am so excited - it's such an exciting time," Wozniacki said after her 2-6, 6-3, 6-3 win over Lisicki which, it transpired, had not really been the thing uppermost in her mind.

"We have set the date," she admitted, without being prepared to say when that was. Was it this year? "You never know," she responded, but with a mile wide smile which gave the impression that it was.

Wozniacki was more forthcoming when asked whether she is a better golfer than he is a tennis player. "It used to be I was a better golfer, but it's not any more, because in the off season he was hitting every day," she said. "So that's not fair.

"I started hitting it decent after I hit for a couple of weeks, and I'm really happy and pumped and excited, and then I don't play for four months, and then I come back and I'm back to zero."

She was able to turn the match against Lisicki around partly because she maintained a very high percentage of first serves even when under severe pressure from one of the hardest hitters in the game, but also because she got a lot of return of serves back deep.

That opened up more opportunities to attack, and enabled her to make her backhand more offensive and to get Lisicki moving rather more.

A break of serve early in the final set, to take her to 3-1, consolidated to 4-1, also altered the psychology of the contest, an advantage which Wozniacki, intensifying her focus, was determined to cling to.

She now plays, not Samantha Stosur, the former US Open champion from Australia, but a qualifier, Annicka Beck, the world number 50 from Germany, who prevailed 1-6, 6-1, 6-4.

Wozniacki may now fancy her chances of winning the Dubai title again, but winning in successive weeks can be a difficult proposition, as Simona Halep, whose brilliant performances earned her last week's Doha title, quickly discovered.

The young Romanian had been fortunate to get through that week with a persistent achilles problem.

Now her injury was too fragile to survive another pounding and she quit after only two games of the second set against Alize Cornet, the French number one. the score was 6-1, 1-1 retired.