Rodgers expects Liverpool to rise to the occasion at Arsenal 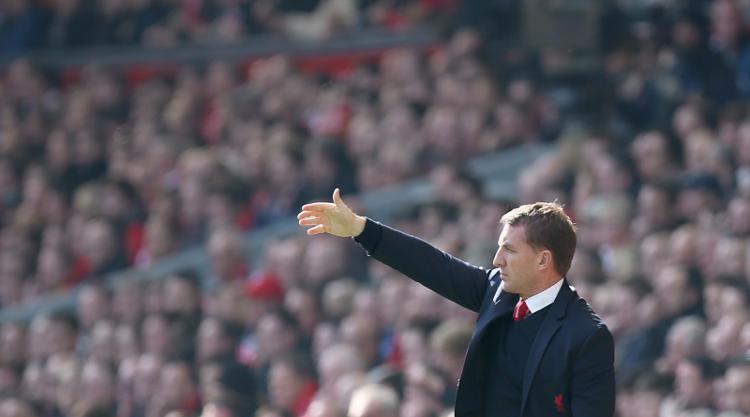 Brendan Rodgers has called on Liverpool to put a turbulent period behind them by securing a vital victory at Arsenal as the race for a top-four finish in the Premier League hots up.

A 2-1 home defeat against Manchester United in their last game before the international break was Liverpool's first domestic league loss since suffering a similar fate at United's hands in mid-December.

But it was enough to leave Rodgers' side in fifth place in the table, five points behind United who occupy the final Champions League qualifying berth.

Arsenal are a further point ahead and with just seven games left after Saturday's early kick-off at the Emirates Stadium, the Gunners would almost be out of sight if they beat a Liverpool team trying to set aside the latest fall-out from Raheem Sterling's on-going contract saga.

"It's a game we will want to get something from," said Rodgers, who insists that even though he has rejected a vastly improved offer and delayed further contract talks, England winger Sterling will not be sold in the close-season.

"In terms of the objectives going into the game, it's no different to what it was before Manchester United. But of course we had a disappointing result and performance last time out.

"We really want to make sure we perform and give ourselves a chance to get a positive result."

Liverpool will be missing captain Steven Gerrard and defender Martin Skrtel as they start three-match bans for red cards received against United, retrospectively in the case of Skrtel after he was ruled to have stamped on United goalkeeper David de Gea in the final moments of his side's 2-1 loss.

"I am disappointed our appeal did not succeed as I thought it was unjust in terms of him getting the ban," added Rodgers.

The Reds boss will be boosted by the inclusion of striker Daniel Sturridge after a hip injury had ruled him out of England's games against Lithuania and Italy in the last week.

"Daniel is back training with the team today (Thursday). We'll see the reaction of that tomorrow," Rodgers said.

"It was his first day back in so he wasn't as sharp as he would want to be but he's back training with the team and should be fine for the weekend."

Liverpool midfielder Adam Lallana missed England duty with a groin injury but may also be fit, while the return of Brazil international Lucas Leiva, 28, on the bench against United after missing 10 games through injury, is a further boost for the Reds.

A seventh league victory in a row would put Arsenal in a strong position in their quest for an 18th successive Champions League appearance, but Gunners manager Arsene Wenger isn't paying too much attention to the league table just yet.

"I'm not too much into the mathematics now. We do that after the game. What is important is just for us to win the game and produce the performance," he said.

"It's a big game and an opportunity for us to continue our run, which is what we want to do.

"We are on a strong run and we just want to focus on winning our games. Liverpool is a big opponent but we play at the Emirates and we want to do it.

Meanwhile, injured quartet Jack Wilshere, Mathieu Debuchy, Mikel Arteta and Abou Diaby are all closing in on first team returns and played in a training ground friendly earlier in the week.

"It went well and there were no problems after that so that's good news," Wenger added.

"You want everybody back in the final months to compete at the top level and you know consistency will play a big part in the success of the team. To have everybody available will help."