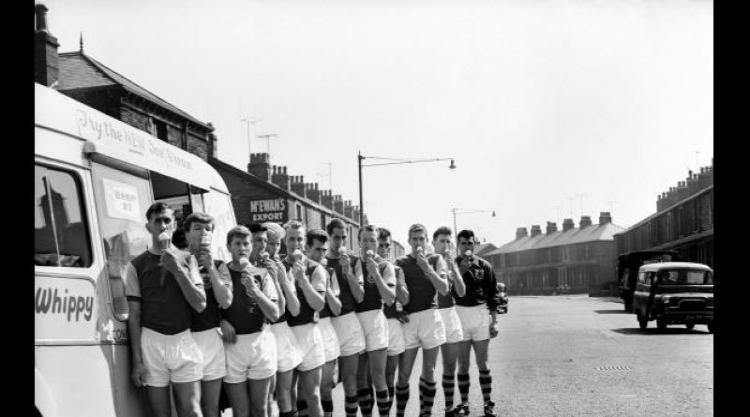 "Harry Potts Way" is well known to Clarets fans and Harry will be known to many oldies like myself as he spent almost half of his life as a player and manager at Turf Moor and even enjoyed watching them in his later years.

Harry was a relatively unsung hero who did not seek or attract great media attention, but was a man who gave the famous old East Lancashire club its greatest success in its long history.

(Pictured are probably the best eleven players ever assembled in a Burnley team by Harry Potts, the FA Cup losing team of 1962.)

Like his predecessor Alan Brown, Potts was a product of the football mad Tyne and Wear area. Brown also played for and managed the club but was lured back home to his native North East, after serving for just three years as the Clarets' manager.

Harry was on the clubs books for 13 years as a player and had two stints as manager totalling 14 years, finishing in 1980. It cannot be a coincidence that his beloved Clarets won trophies in both his player and managerial roles.

Harry was actually born in Hetton-le-Hole, as was Ralph Coates and the revered ex-Liverpool boss Bill Paisley, another footballing legend, this time at Anfield. Harry joined Burnley as a junior in 1937, where the club had one of the first youth-development systems in football.

However, the outbreak of World War II in 1939, came before he could make his début for the club so he served in the Army, mainly in India as a Physical Training Instructor.

Potts played a few times in war time fixtures for Fulham and Sunderland, but his first league action for Burnley did not come until seven years after he first joined the Clarets as a youth player. The war years meant Burnley fans did not see as much of Harry as was initially planned.

He eventually made his Burnley first-team début on 31 August 1946, playing in the "inside-left" position, wearing the number 10 shirt. He played in all but two of Burnley's 42 Division 2 games that season, being the club's leading goal scorer with fifteen goals. The Clarets finished second in the table and were duly promoted.

They also reached the 1947 Wembley Cup Final against Charlton Athletic. Harry played in all nine of Burnley's FA Cup games during that memorable season games including the final, which Burnley lost 1–0.

In the following season, Burnley finished third in Division 1, Potts scoring 14 goals in the 38 game season. Burnley occupied a mid-table position over the next few years and Harry continued to add to his tally of goals. He eventually got 47 from 165 matches for the Clarets before moving to Everton for £20,000 in October 1950, a significant sum in those days. New signing Jimmy McIlroy who cost the Clarets £8000 from Glentoran, would eventually take Harry's place at inside forward.

Harry Potts move to Everton was not a real success story  and he failed to grab a regular place in the Toffees' starting eleven and they were relegated in his first season. Everton bounced back and were promoted in 1954 and spent two top-flight seasons in mid-table. Harry ended his playing career at Goodison Park in 1956, having scored 15 goals in only 59 League games for the club in that time.

After working for Wolverhampton Wanderers as their Chief Scout, he became manager of Shrewsbury Town, but Burnley brought him back to Turf Moor to become their manager after just 6 months in February 1958, when Allan Brown was attracted back to his native Sunderland.

There is no doubt Harry Potts benefitted from the scouting system and the training facilities at Gawthorpe. The young talent being developed there and the tactics developed by the innovative Brown, including short corners and free kick arguments to distract the opposition.

Harry Potts was a deep and impressive soccer thinker, developing the 4-4-2 formation as a playing system and made the club a family club with a unique team spirit that the contemporary Burnley gaffer Sean Dyche still embraces today.

Burnley finished that season in sixth position and in his first full season in charge Burnley finished 7th. Harry made Alex Elder his first "big money" signing for the club, paying the princely sum of £3000.00 for the Northern Irish left back. The Burnley youth system meant that many young players were knocking on the first team door and the next season brought Burnley's second Division 1 Championship.

The Clarets won the title in the last game of the season at Maine Road. The following season the club represented England in the European Cup, reaching the quarter-finals and finished fourth in the League and were both FA Cup and League Cup semi-finalists.

In 1962 Burnley were runners-up in both the FA Cup and First Division, the latter being a bitter disappointment after leading the dvision by 6 points with a game in hand over Alf Ramsey's Ipswich Town in early March.

Burnley lost 3-1 to Bill Nicholson's arch rivals Tottenham Hotspur in the 1962 FA Cup Final, in a game still regarded as one of the finest finals ever to be played at Wembley.

As a manager, Harry Potts promoted attacking football, preferring to win 6-5 rather than 1-0 and was more of a motivator of players rather than a master tactician, according to the legendary Jimmy McIlroy, who said he never once heard Potts raise his voice in anger.

In 1963, the loss of the maximum wage impacted on the club and Potts was forced by the Burnley Chairman Bob Lord to sell Jimmy McIlroy. Potts told McIlroy that his performances hadn’t been good enough, but he couldn’t drop a talented player like him, so Jimmy was sold to Stoke City instead!

The club finished third that year. Potts must have been a great diplomat to survive for so long under Bob Lord's notoriously difficult Chairmanship. Burnley fans however,blamed Harry for the McIlroy ousting and "POTTS OUT" signs could be seen for years after the controversial sale of McIlroy.

Crowd sizes fell by thousands at Turf Moor creating more financial problems for the club. Nevertheless Potts steered the Clarets to a respectable third in 1965-6 and then earned European competition for the Clarets again. This time, it was the Inter-Cities Fairs Cup (now the EUFA Cup) in 1966-7. However, the club had now started to sell players to survive and performances inevitably diminished.

His last game as manager came in 21 February 1970, Burnley thrashing Nottingham Forest 5–0 at Turf Moor. Harry then moved into the executive position of general manager with Jimmy Adamson taking over as team manager. This was an unwanted and unhappy move for him, and he left Burnley just over two years later. In this time he managed 605 games winning 272 and losing 192.

In December 1972, he left to become manager of Blackpool, then a Division Two side and guided them to seventh-place in the league, the year that Burnley won the old Second Division championship. His first full season in charge almost ended in success when after leading Sunderland 1–0 with only seven minutes to go in their final match of the season, the team lost 2–1 and missed out on the third promotion place. By the end of the 1975-6 season campaign, chants of "Potts Out" rang out around Bloomfield Road the Seasiders' Board sacked him in May, after 208 games, winning 83 and losing 65.

Potts was re-hired by Burnley now in Division 2, becoming their chief scout in 1976. After a poor start to the season, the Burnley manager Joe Brown was sacked in February 1977 and Potts became manager for the second time, helping them avoid relegation by 5 points and they finished mid table for two seasons, winning the now obsolete Anglo Scottish Cup.

Following a poor start and after 11 winless games in 1979-80 he was sacked and Burnley were relegated to Division three. In this stint he managed a further 123 games winning 42 and losing 49.

He continued his love affair with football and scouted for Colne Dynamos until the onset of Parkinson's Disease sadly restricted his activities. Harry Potts  died on 16 January 1996, aged 75.

Prior to his illness becoming too restrictive, Harry was often to be seen at Turf Moor watching Burnley as a fan. Burnley Football Club remembered him on his funeral day, the 1959–60 Championship-winning side, plus many of his former players and colleagues. Burnley fans and the whole town paid their respect as his funeral cortège stopped outside the stadium.

In 2001, the section of Brunshaw Road which runs past the Turf Moor stadium was renamed "Harry Potts Way" in his honour.  A man who gave so much to football in general, Burnley Football Club in particular and the town of Burnley, certainly deserved the honour and perhaps much, much more.

This appreciation of Harry Potts was written by Burnley fan and regular Clarets Mad contributor "Old Colner" and is the third in a series of Turf Moor legends. (TEC).