Manchester City are Manuel 'Pelle-grinning' all the way 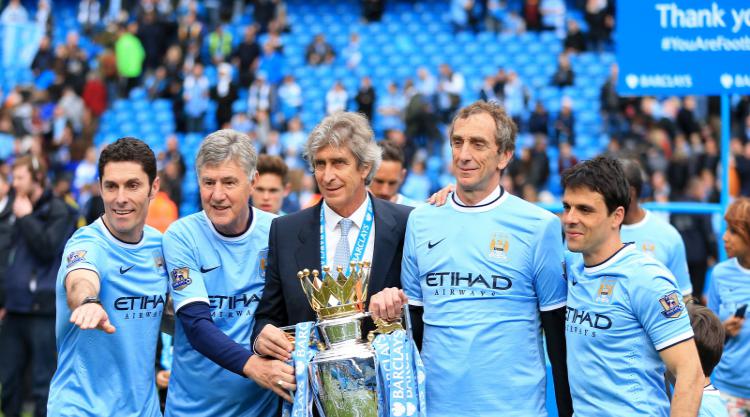 The 2013-2014 Barclays Premier league campaign ended with fortress Etihad resembling an ocean - the stars of the afternoon swimming like joyous fishes amidst their supporters. Sky blue all over – up above, down on ground and in their hearts.

Contrast this to a year ago; specifically to this day. Citizens endeared a lot of heartburn when the person who had given them taste of success, was duly sacked. Roberto Mancini’s three trophies in four years was nothing more than a good starting point for Sheikh Mansour and co.

Enter Manuel Pellegrini and in a year’s time he has upgraded ManCity by a few notches and his personal profile to that of a top bracket manager. Here’s why.

- Wins his first European domestic league trophy. A footnote here would be the record breaking 96 points he achieved with Real Madrid, and still fell short to mighty Barcelona.

- The scintillating displays from the top two were the best advertisement for the league. Liverpool finished with 101 goals and Man City’s 102 strikes was a far cry from the 66 goals they laboured the previous season.

- No last gasp Kun Aguero winner required and Vincent Kompany’s heart pounding post game interview of 2012 was replaced by joyous celebrations of his winner, which sealed the title. Meanwhile, Aguero missed four easy chances, made stupid fouls and generally behaved like a pampered kid. Yet team City were so strong that they didn’t need his services on the big day.

- No significant dressing room bust ups. The Mancini era was punctuated by frequent incidents reported from the Carrington training ground.

- No distraction boys, no Tevez refusing warmup, no Balotelli and his needless firecracking.

- Pellegrini engineered excellent transfer moves with Fernandinho being the best import into the league this season. Spaniards, Navas and Negredo tore apart teams during first half of the season.

- Edin Dzeko had his best year. Pellegrini started the season announcing him as the spearhead, and despite dips in form, the Bosnian delivered every time he was needed to. Most notably towards the final stretch.

- Luiz Suarez may have got the PFA player of the year award, but it’s debatable if the honour should have been bestowed on Yaya Toure – easily the most versatile player in club football now. Amongst top team midfielders in EPL, he is only behind Henderson for maximum minutes on pitch. Toure played in Europe too, Henderson didn’t. Credit to the manager for getting the best out of him, something Yaya will find tough to repeat in the coming season.

- Pellegrini was also picked for his European pedigree. Although he took City beyond the group stages of Champions League for the first time, he couldn’t match it with his previous exploits with Malaga and Villarreal. Maybe coming season!

In mid 2010, Sir Alex Ferguson had backtracked on his own words within a year. From “small club with small mentality” to “lot stronger this time… we can all hear the horses' hooves galloping closer”.

Manchester City have come a long way with that galloping. Manuel Pellegrini’s boys will start favourites for the coming year too. Since 2006, barring one season, the title has stayed at Manchester. Maybe it’s time to rebrand the league as Manchester Premier League!