106 years of history come to a head at Underhill. 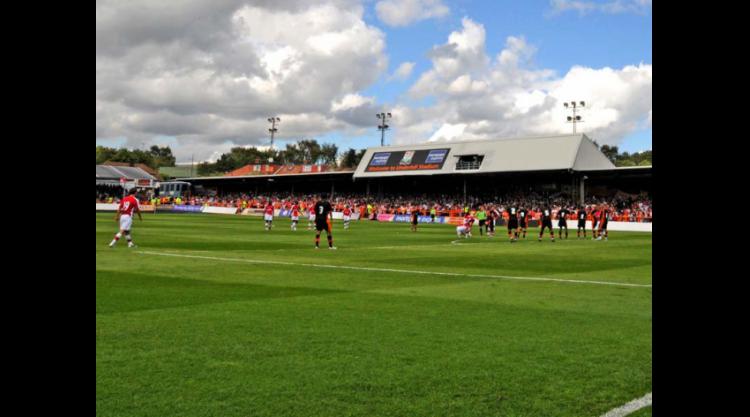 Back in 2003 I enjoyed the spectacle of the last ever Manchester City game to be played at Maine Road, where a buoyant home team signed off in style with a 3-0 win over Sunderland. It was more than your usual football match, as the occasion was heavy with emotions as mixed as they were varied. It was also my younger brothers first ever football game and we witnessed not only a great game, but the chaos and confusion of a full on pitch invasion at the final whistle. So, when I received an invitation to taste the action at the last game at Barnet FC’s historic home of 106 years, Underhill, I knew I had to attend.

With its famous sloping pitch, overlooked by the bedroom windows of neighbouring houses on Westcombe Road, Underhill is a good old-fashioned lower league football ground. Its status as the home of a football league ground has on occasion been under threat for varying reasons, which mirrors the on-going struggle of its football team. Heading into the fixture against Wycombe Wanderers, Barnet were attempting to keep their head above the surface at League 2s trapdoor into the purgatory of Conference football. Barnet needed three points from the game in order to head into next weekends end of season fixture against Northampton with a fighting chance of staying up. Barnet are a team that have treaded the water between League football and Conference football for a number of years and only re-joined the Football League again as recently as 2005. A prolonged period in the professional League is what clubs of Barnet’s stature need, in order to progress even marginally in terms of playing squad and finances.

The game was held up for fifteen minutes to allow all 6,001 spectators to squeeze into the stands. Barnets average attendance this season stands just above 2000 and I wondered how many of the fans were interested neutrals, here to savour the energy like I was. The hard-core fans in the West Stand chanted energetically before kick-off and continuously throughout the game, accompanied by the noisy and rhythmic boom of a marching drum. Some faces looked happy and excited, others more stern and tense.

Apart from its special status as the last Barnet game at the ground, the game also possessed an interesting sub-plot. With Edgar Davids and Gareth Ainsworth in charge, professional footballs only current player-managers were in opposition. With Davids in midfield and Ainsworth on the sidelines as a substitute, Barnet began the game in much more positive fashion. Keanu Marsh-Brown providing a quick and exciting outlet for Barnet and created a number of chances with his ability with the ball at his feet, causing the Wycombe right-back Michael Harriman all sorts of problems. The midfield area was developing into a no-mans land of borderline yellow cards and 50/50 tackles.

Davids and Curtis Weston eventually took charge of the strategically vital centre circle and were threading opportunities down the flanks for Marsh Browne and Kyle De Silva, a plan that was working other than the fact that Wanderers goalkeeper Matt Ingram was producing a fine performance, blocking and saving the efforts on goal that Barnet began to stack as crosses and set plays winged their way into his area.

The atmosphere became flatter as the game reached half time, and a sense of anxiety was creeping through the air and laying heavily on the shoulders of fans who have become too accustomed to drawback and falling short. To their credit, Barnet’s young team continued in the second half where they left off and their willingness to fight harder than their opponents in midfield paid dividends in the way of increased chances in front of goal. A standout moment of skill came fifteen minutes into the half when Barnet’s leading scorer this season, Jake Hyde, superbly set up a chance with an overhead pass for Davids to run onto through the middle of the D, only for the 40 year old Dutchmans powerful shot to drift wide of the post and into the sun drenched ranks of away supporters at that end. Moments later from a corner, impressive centre-half David Stephens followed up with a strong header that flashed inches over the cross bar from close range

The breakthrough eventually arrived on 81 minutes when a now familiar attack down the left wing produced a low cross for Hyde to tap home from three yards. Ingram on this occasion had no chance and an ecstatic home support bounced and cheered wildly as belief and hope raced through the minds of the delirious home supporters. But with the game heading into injury time, the positive and hopeful energy oozed from the ground when Wycombe were awarded a penalty, following a clumsy and nervous tackle from Tom Flanagan on Bruno Andrade.

Some Barnet fans looked away as Joel Grant prepared to dump Barnet back into the relegation places from the spot. This was what some Barnet fans had half-expected anyway, and some were shaking their heads at themselves for believing that things would go their way. This is the feeling that many lower league team supporters, myself included, are all too familiar with. Grant hit his penalty well but Graham Stack dived the right way and patted the ball wide with a fantastic save. Me, my friend, the fans that couldn’t look, the fans that could, each and all celebrated wildly, feeling that extra bonus joy that descends when your team beats the odds at a crucial moment. Barnet players grabbed and hugged the heroic keeper, who did what all good keepers should do and pushed them away from him and pointed at the positions they should be taking for the upcoming opposition corner. The remaining three minutes passed and turned into three excellent points, leaving Barnet above Wimbledon, third from bottom.

Fans rushed onto the pitch despite the customary announcements not to do so, which actually act as an invitation for fans to get on the pitch anyway. The away stand emptied anonymously while the other three stands emptied almost completely onto the pitch. What was in one minute a football stadium became in the next moment a piece of history, a photo opportunity and a place to look back on with pride. As one friend put it, it was the end of an era, but Barnet fans left on a high, with the knowledge that the familiar feelings of strife, hope and uncertainty will still form part of the furniture at their new home.