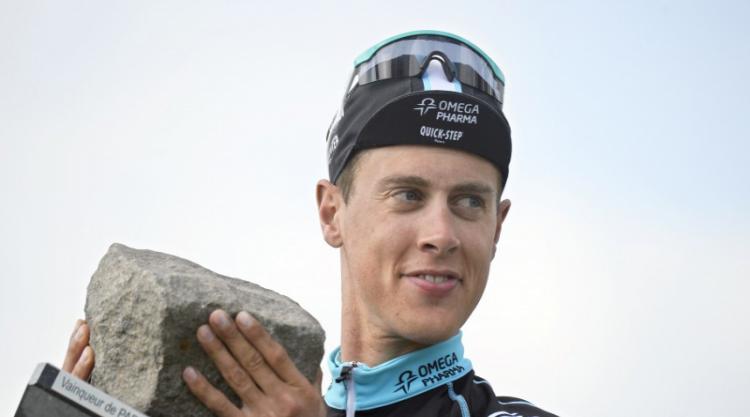 The race, first run in 1896, called "The Hell of The North" - a 257km 'Queen Of The Classics' race with climbs and cobbles with 28 sectors, started in Compeigne with a strong field of 199 riders including 2012 Tour De France winner Sir Bradley Wiggins, Fabian Cancellera, the winner of last week's Tour Of Flanders and Tom Boonen who was going for a record breaking fifth win.

After 70kms, that lead had gone out to 9.20 before the roads turned to pave sections and the escapers went through sections 26 and 27 with a lead of 7.40.

Through the three star dry dusty cobbles of Sector 20 with 115ms to go, the lead was 6.27 witn Wiggins, the first Tour De France winner to ride the race in twenty two years and a man who declared this the biggest race after the Tour De France, at the back keeping an eye on proceedings.

Ten kilometres later, there was a crash under a bridge which slowed down some of those at the back. and caused a split in the peloton. David Millar of Garmin-Sharp was one of those held back.

Berni Eisel of Team Sky was on the front of the peloton with Geraint Thomas and Luke Rowe as they hit the dusty pave of Haveluy on Sector 19, heading for the five star category section Arenberg, watched by big crowds.

Onto the Arenberg and Schillinger was distancing the remaining riders from the break.after Boucher punctured and did seventeen other riders.

Jan Barta crashed before Schillinger led the riders through sector seventeen with 89kms to go.

Boucher was delayed at a railway crossing before there was a crash involving Tankink from Belkin.

Schillinger, De Troyer, Murphy and Jarrier were the escapers with a lead of 4.02.

With 82.1kms to go, race favourite Fabian Cancellera was delayed by a crash caused by his team mate in Hayden Roulston who jumped off a pavement.

Onto the cobbles of Hornaing and the four escapers had a lead of four seconds less than four minutes ahead of a peloton which was split all the way down the pave.

The gap was down to 1.50 by the time the riders which was down to three after Murphy dropped off, reached sector fourteen which was first used in 1980 and was 2.4kms long.

Tom Boonen was one to attack. The Omega Pharma Quick Step rider went with 64kms to go with the front trio only fifty seconds ahead.

Paollini of Katusha crashed and a Cofidis rider ended up in a ditch as Schillinger, De Troyer and Jarrier were caught.

Tom Boonen was now taking control of the race and got himself into a lead group with Geraint Thomas, Gaudin, De Backer, Martinez and Matthieu Ladagnous of FDJ, who had a 23 second lead with 58kms remaining.

On to the Mons-en-Pévèle which was another of the five star cobbled sectors and their lead was holding steady. Bram Tankink joined this lead group.

Behind them, Fabian Cancellera turned up the gear to get after Sep Vanmarcke.

Peter Sagan of Cannondale than attacked. passing the Boonen group with twenty kilometres to go with a ten second lead going into sector five.

Wiggins moved up into the chase group as the race hit the Carrefour de l’Arbre sector.

Sagan was joined by Cancellera, Stybar, Vanmarcke and John Degenkolb, who were fifteen seconds ahead of the group containing Boonen, Wiggins, Thomas, Terpstra, Langveld and de Backer, going into the final twelve kilometres.

The Wiggins group bridged and heading towards the velodrome in Roubaix, not far from Lille, it looked with a 22 second group that it was going to be one of this group who would win this race.

With 6.2kms on a tarmaced road, Niki Terpstra launched a raid off the front. The Omega Pharma Quick Step rider quickly attained an eleven second lead and had increased that to eighteen seconds with 2.7kms left.

Into the velodrome and Terpstra was on his own. The Dutchman took the bell lap and won in 5.38.57 ahead of John Degenkolb who won the sprint for second place ahead of Cancellara, Vanmarcke, Stybar and Sagan.

Geraint Thomas was seventh with Bradley Wiggins in ninth in a Paris Roubaix race which had an average speed of 45.49km/h and was the fastest ever.

Terpstra told Eurosport: "i have had some good results but to take a result in this is a dream come true. It is a race that suits me well.

"My shape was really good and the team were good and I attacked and it was a good attack."