The Nike Monopoly in Sport 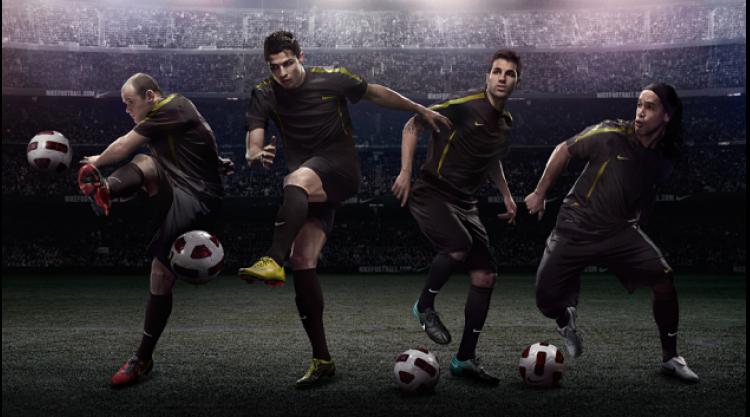 Everywhere you go, you'll see Nike. It's almost a given. In today's modern world of marketing, advertising, commercialisation and consumerism, it is almost impossible to avoid big name brands. Just look at the global successes of Apple (the company, not the fruit), Google or even Coca-Cola. Household names that we read of almost as second nature. With regards to sport, however, one particular brand seems to trump all others. Adidas, Puma, Umbro, Diadora; there are a whole list that come close, but it is Nike that stands today as the pinnacle in footwear, apparel and sports equipment.

Aside from football, just for a second, Nike's 'swoosh' tick can be spotted across a whole range of sports, endorsed by a number of (highly paid) sporting figures. From Tiger Woods' iconic Nike baseball cap to Michael Jordan's Nike air max sneakers, the corporation has successfully diversified itself over the years in order to represent a number of top athletes. In tennis, it's Rafael Nadal; in cycling, Mark Cavendish, in cricket, the Indian national side. You get the idea. These are the teams and individuals that succeed in sport. And where there is success, there is Nike.

The Barclays Premier League, in its own right, is a story of success. With or without Nike sponsorship, the Premier League boasts a number of lucrative television contracts, estimated to be in excess of £1 billion per year as of 2013-14 and is consistently the most-watched football league in the world, broadcast to over 600 million homes worldwide and a potential TV audience of 4.7 billion people. So, where exactly does Nike come in to the equation?

Well, you don't have to look far before it becomes apparent just how commonplace Nike is within the English top flight. Did you know that on the opening weekend of the Premier League season in August 2013, of a total 220 players that started for their respective teams, 127 sported some form of Nike boots?

Certain players, such as Chelsea's wide-man Eden Hazard and Arsenal's Theo Walcott, opted for the rather flamboyant Nike 'Mercurial Vapour' whilst defenders Branislav Ivanovic and Patrice Evra (of Chelsea and Manchester United respectively) preferred the slightly more reserved Nike 'Tiempo'. The most popular Nike boot of them all, however, was the Nike 'CTR360'. Sounding more akin to a spaceship straight out of the Star Wars franchise or the latest antivirus software available to download, this particular boot was worn by a total of 48 players including Alex Oxlade-Chamberlain and Tottenham Hotspur's Icelandic midfielder, Gylfi Sigurdsson (below).

The manufacture of boots is not the only thing that Nike dominates in the Premier League. They also supply the official match day balls and certain team kits. These teams, it's worth noting, currently include league champions Manchester United, derby rivals Manchester City, Arsenal F.C and also Everton F.C. On a side note, Nike have more recently replaced Umbro as the official sponsor of the English national side (which perhaps begs the question, does Nike truly represent the zenith of sporting success?).

Whilst Nike's decision to sponsor the English national side has raised a few disconcerting eyebrows in recent months, the company's sponsorship of certain individual players from across the globe is unquestionable. Players such as Cristiano Ronaldo, Neymar, Sergio Ramos, Zlatan Imbrahimovic and Franc Ribery; the all too familiar names that perhaps best characterise Nike's famous slogan, 'Just Do It'.

Are we to believe, therefore, that Nike is a superior sports brand? As consumers, the many successes of Nike's multi-million pound advertising campaigns and its frequent use of global sporting icons has undoubtedly instilled this public perception. Whilst it may well be naive to assume that Nike actually produces sports clothing of any better quality or value when compared with other leading distributors, there can be no denying that Nike's underlying story of success relates to their unique combination of marketing and sports.

The players that are often sponsored by Nike are not simply demonstrating an affiliation with a type of brand but rather they are reaffirming the intrinsic strength of Nike's global grip upon football and, more generally, sport. A player that is sponsored by Nike, in effect, endorses the corporation's great hidden message; to wear the best, to have the best and, to an extent, to be the best, you must wear Nike.

As a company, Nike ought not to be criticised for its success as an internationally recognised label. It's astute realisation of the twinned power of sport and marketing has effectively propelled it to the forefront of its field and this should not be considered as a flaw. As a brand, it represents the peak of sporting talent, an apex of ability, the summit that we aspire to. Nike's great flaw, however, is the hidden message that its profitable sponsorship deals endorse. As a sponsor, Nike cultivates this sense that it is an exclusive product manufactured by the best, for the best.